There's something about Transformers that intend to disguise themselves by turning into something that's not common. Pretty sure there wasn't any dinosaurs walking around in 1985, though there likely could have been a UFO just flying around. After all they were aliens. Though by the post movie years when things got more space opera, you got more far out ideas like the Monsterbots. A group of Autobots who transformed into monsters.

The Monsterbots took up with the Beastformers/Battle Beasts and made a home on Planet Beast. As awesome as that is, part of me wishes they would have had more of a role in Masterforce as they fit the series tone better. I think so anyway, with things like Seacons and Pretenders battling Super Sentai style, I can't help but to thing they'd fit in as their monster modes would effectively be Zords.

I've always enjoyed how the advertising for said bots of monster played up their standing as in fact monsters. From the commercial showing them bursting from the lab of there creation, to print ads indicating their scariness, Hasbro wanted you to understand that these are monsters. I talked about the Halloween Horrorcons here before. But, something tells me, that somebody clearly always wanted scary robot toys behind the scenes. I'm not complaining either, it's like 75% of my site. Considering the unreleased Universal Monsters Transformers around the same time... suddenly my weird site about robots and monsters isn't so weird after all. It's totally normal to post about Halloween in February. 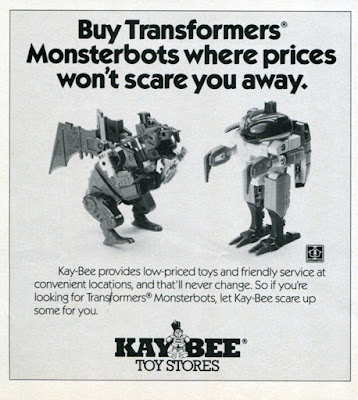