What's more Halloween than dressing as a monster and later throwing eggs at that old lady who keep's giving out those gross peanut butter things house? Well, not much, but speaking of peanut butter, know how it's so special when Reese's mixes peanut butter and chocolate? Well Bandai put the egg and monster together for Tamagoras Egg-Monsters! Mixing classic monsters and kaiju into the egg robot formula for pure magic.

One fall day in my early 20's I accompanied my mother to the hospital for a light surgery. I had spent the night at her place and drove her to the hospital. Hanging around the hospital, and driving her back home... I was getting pretty bored. Fortunately a run to the local drug store to pick up her prescription gave me a much needed escape. While waiting for the pharmacist to open the bottle of pills behind the counter and carefully count them out, I was happily looking through the Halloween aisle.

There they were, hanging from one of those ... hangy things with clips that stores put things... on... the hell are those even called? Was glow in the dark skeleton eggs! I quickly bought one and a Pepsi before heading back to my Mom's house with her medicine. While waiting around her place a little longer before going home I transformed my egg into a skeleton. Overjoyed with my new toy I made a point to stop back by the store and grab another (and a Pepsi) before going home. Later on that evening I was looking up egg robot toys as they were fresh on my mind. Turns out I got a bootlegged Tamagora Egg-Monster! Turns out these were what Meteorbs were made from! Turns out I made a post about egg robots into two and tied one into Halloween! 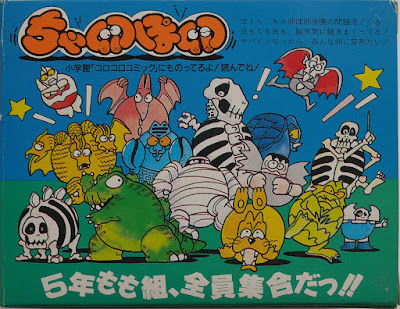