Christmas in July, Halloween in May. Summer is the prelude to Halloween and I've got monsters on my mind. With so much of my focus on smaller Transformers (and fortunately Hasbro feeding this need) I find myself really wishing they'd do something like the Monster Pretenders again. Not just because it's something I'd personally love (maybe 95% why), but as Generations has been focusing on late G1 the past few series, I think this would be a great fit and add a little variety. That and monsters are hip daddy-o, monsters are on the rise in popularity. Godzilla is doing so well in America that Toho is setting up offices here to capitalize after the deal with Legendary expires in 2020. You damn well know I'm excited about that.

This Italian commercial from GiG's Transformers line calls the Monster Pretenders just Pretender Monsters. This works really well as it flows a little better than Monster Pretenders as a name. At the time I'm thinking Monsters in my Pocket were on shelves as well as other 'gross' toys, so obviously GiG was marketing towards that market with this cool as crap commercial with monster hands ripping away the monster shell. Not to mention that AWESOME logo. I am so freaking jealous of that logo and with the way GiG sold these guys. So freaking jealous.

It's kind of genius in a way, if they really sold well, they could release multiple color variations so you could make your own Monstuctor and even get some cool slime add on for the shells. Just imagine a world where Transformers became a cool monster line. I do often admittedly, but as the line has had so many damn monsters in it already... why didn't it? 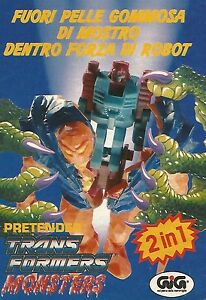