Animorphs wasn't a successes (I mean, I liked the toys... but that was something I found out after they went on clearance), however a company doesn't start out to fail at something and there was a few Animorph Transformers toys designed that went unused in the line. Somebody had the idea to remold the human bits into robot parts and release them. 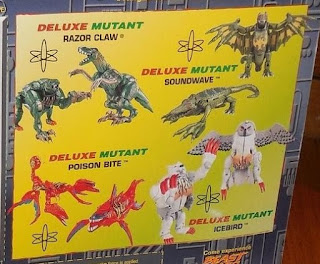 So there you had the Mutants of the Beast Wars, The Mutant Beast Wars! What made them mutants exactly? Well, thanks to a virus unleashed by Megatron, these Fuzors were lost in their beast modes. Transforming from beast mode to beast mode with the robot lost inside (but maybe you could find their robot head peeking out). In case that description and the picture above doesn't clue you in, they don't have a robot mode. Icebird, for example, turns from owl to bear.

Like Animorphs, they were great toys, but now they were actual Transformers (not just in name). Though like their Animorph heritage, they were misfits in the Transformers fan world. As one could expect the G1 Purist crowd obviously despised them. A good deal of the beast era fans also wasn't fond. Though a handful of us did, and personally I loved them.

I was all over the figures the moment they arrived at my local Walmart. In fact the first one I grabbed was Icebird (my favorite of the bunch) one Friday night. I had the night off and took a quick stop to check out the toys and grab a bite to eat. An excited jump in the air lead to grabbing Icebird and a pack of chicken wings. That evening was spent with a toy I couldn't put down and messy homemade buffalo wings. Mutant Beast Wars didn't have any fiction outside the text blurb on the packaging. If I was a better writer, I probably would have written tomes of terrible fan fiction. The Mutants DID however appear briefly in 3H's BotCon comics. While they didn't get the biggest starring role, I was glad for something. Later they made some various low key fictional appearances in IDW comics and Fun Publications Fan fiction. Soundwave even made appearances in E-Hobby and Kre-O manga.

The Mutants never got any extra members, though some fans speculated Savage/Noble (Beast Changer) could be a Mutant. The 'Ask Vector Prime' Facebook Page (ran by Fun Publications) said in some realities he was and in some realities all BW characters were Mutants. Which I suppose in some reality is an answer and in some reality the alternate reality trope isn't played out yet (but Thanos still wins). All jokes aside, I've never considered him to be a member, but if you want to go ahead. There's a multiverse shoehorn for that. 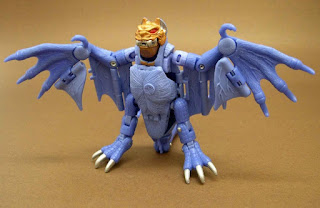 Another would be new member is Leatherhide. A planned repaint of the Soundwave mold for the ill-fated Halloween Horrocon sub-line (that's a nifty name, huh), Leatherhide would probably be released as an Autobot, but a Mutant in any fiction. Leatherhide fictionally did appear in The Allspark Almanac volume 2 and in Fun Publications fiction meaning I'm not the only person who really wanted this toy.

Mutant Beast Wars over the course of time has managed to remain obscure in the greater world of Transformers with a little nod here and there. An odd team of misfits loved by some and despised by others. I suppose for the opposing team it's a good thing they didn't take off. Though as someone who came close to buying a test shot at a BotCon, I would have loved for them to take flight. The little nods here and there are great (and appreciated), but in some alternate universe I have a display of Mutant Beast Wars Masterpiece toys.
at May 09, 2019
Email ThisBlogThis!Share to TwitterShare to FacebookShare to Pinterest
Labels: 3H, Animorphs, beast era, beast machines, beast wars, BotCon, e-hobby, fandom, Fun Publications, Halloween, Halloween Horrorcon, kre-o, kreon, mutant beast wars, mutants, tfcc, Transformers, Zone Base