Pretenders Monsters Are Too Yucky!


Between the various monsters of the post movie toys, The Pretenders, and a few un-produced concepts, somebody at Hasbro/Takara clearly was taking cues from the spookier side of things. It's not just Transformers either. Masters of the Universe introduced the Evil Horde, who took the army of Halloween decorations concept of He-Man's villains to new levels. Hasbro had the Inhumanoids, Tonka had the Supernaturals, Kenner had Ghostbusters, and Mattel introduced Mad Scientist. Movies like The Monster Squad and Teen Wolf were popular among kids. There's a bunch of other examples, but I think you get the my point. Clearly, I wasn't the only kid in the late 80's into monsters.


Check out the attached commercials above and the print ad below for the Pretender Monsters. Hasbro's clearly selling the monster shells above the robots. The very top commercial is the Italian ad. Notice how they're selling the Monster aspect super hard with slime oozing off the already gross rubbery skin. Then you get the awesome monster hands ripping apart Scowl's shell to show the Transformer robot who also turns into a monster inside. I particularly love the scary Monsters logo at the end of the ad. I swear they were copying Mad Scientist ads a little here, and good on them.

The second ad is the American one and it's not very different, though the monsters are presented without slime, monster hands, and scary logo. Not sure why, they made for a better commercial and Hasbro was clearly selling the monster aspect. Both have that great original animation with Pretender Starscream (sans shell) lowering them into the vats of goo to create these new Monster Pretenders. I truly love the original animation made for Transformers toys around this era. Not only because the show was in reruns at this time, but it's pretty great looking. Maybe Hasbro was trying to not looks so much like Mad Scientist here, even though the shells do match up design wise. 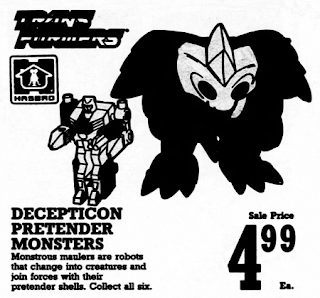 I really wish the Monsters would make a comeback. A cool team of Monsters that made for a great combiner, whats not to love? Considering the amount of slime, monsters, and generally gross toys out on shelves you'd figure Hasbro would jump on the bandwagon again with new versions. I'd figure anyway. Mostly because I want that to happen. So very badly.
at July 03, 2020
Email ThisBlogThis!Share to TwitterShare to FacebookShare to Pinterest
Labels: commercials, creepy, g1, generation 1, generation one, gross, Hasbro, monster pretenders, monsters, Pretender, Pretenders, retro, scary, slime, Spooky, summer, Takara, Transformers, Zone Base