Friday night is the time for frights, aight? Going down our weekly look at the legendary children's book series by Crestwood House as we enter a summer holiday here in the US, I figure The Mummy would be pretty appropriate. It's so hot I'll be walking like old Imhotep by the end of the weekend and smelling like baby powder. Summer is a Spooky Season and nothing is more terrifying than chaffing. Ow.

It looks like the full book is in the preview this time, but if you want to download it to your phone or tablet for free, follow the link in the viewer.

I've always been more partial to Karis than Imhotep as far as the Universal Mummies go. Whenever you think of a traditional Mummy, you're thinking of Karis. Imhotep just left his tomb is the bandages and went about sorcery. I generally like Karis's movies better too. Though there on all the Universal Monsters signage, there's Imhotep. I'd say it's because Imhotep was in the original and Karis was in all the sequels (not counting remakes). But Jason wasn't the killer in the original Friday the 13th either. It's not fair. Karis, I appreciate you man.  Just wanted you to know that dude. 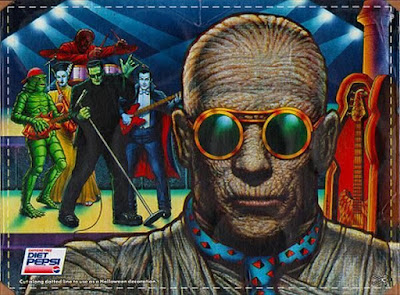