One of the coolest toys of the late 80's was Mad Scientist by Mattel. Everybody loves slime and incorporating it with monsters was perfect. The Monster Lab was one of the most popular sets. Essentially you'd take a plastic skeleton, cover it in flesh, and create your monster. Then you murder it by dropping it in a vat of chemicals that melted the creature before your eyes. You gave the monster life and then took it away in morbid fashion. That is fantastic. 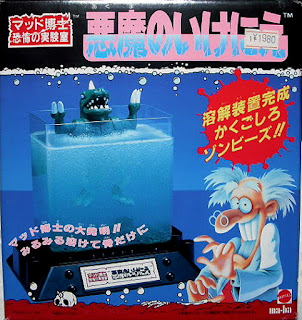 Just take a look at the Japanese version of The Monster Lab's packaging. I'm a fan of Japanese logos, kanji, and Asian horror as is. The straight J-Horror visuals of the box are just wonderful to me. In Japan the line was called 'The Laboratory of Mad Dr. Fear'. It's pretty hard not to love that. Unless you're some sort of monster, and we kill those horribly in this laboratory. Suddenly that names pretty amazing huh?


Another popular set was the Alien Dissection kit. If the commercial above doesn't clue you in to it's amazing nature, let me explain. You have an alien filled with internal organs and slime. Then you rip it out. That's it. The play feature of Mad Scientist was torturing monsters to death in violent and horrible ways. Dammit that's awesome. There was other play sets of varying horror and grossness. Though the last of the line was only released in Japan and worth taking note here. It's pretty great.

Ma-Ba Zombies were a sub-line that followed the initial play sets with tiny rubber freaks and monsters. The figures were hollow with the intention that you'd fill it with slime. Squeeze the monster and watch it ooze out. Pretty simple, but simple usually works the best. There were a few series of these on their own outside of the main line. Mad Scientist was a collaboration between Mattel and Bandai that often gets swept under the rug in most peoples memories. I suppose a toy line of gross monsters that you effective murder violently would be a touch too much for the more lame members of society. I do see various homages to the monsters (mostly the alien from the dissection kit) in the occasional designer toy though. I'm pretty jealous of those lucky kids of the late 80's in Japan. I'd love to have had Ma-Ba zombies.