When you got the (Scare) Glow 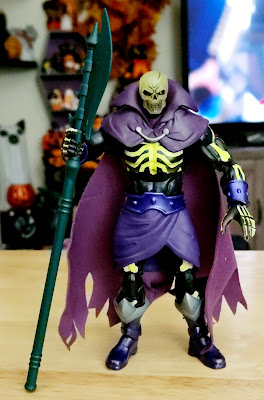 Here to ring in Halloween is Scare Glow, the ghost of Skeletor! Not Skeletor's actual ghost, but a ghost under his service. Glow in the dark skeletons are a staple of the season and this phantom is exactly that! I've briefly talked about Scare Glow and his demonic friend before, however today we're taking a look at his Masterverse representing the spooky one's appearance in Revelation. This is the standard retail version available at regular retail, however there is a SDCC 2021 exclusive version with slightly different paint in cool evil book packaging. They are ultimately the same toy, I just thought pointing that out would be appropriate.

Appropriate is the word for Scare Glow at Halloween. Like i said, he's a glow in the dark skeleton wearing a Dracula cape while caring a scythe. Why a bigger deal isn't made of him this time a year I'll never know. Just picture it, an orange version with a black cape! Really, why Mattel doesn't have a Halloween edition MOTU toy each year is perplexing. I mean, the bad guys are literally walking Halloween decorations and the play sets are haunted houses. Yo Mattel, next time you need a fans input hit me up.

As you can see, Scare Glow is pretty big. Around 6 inches tall (I'm not exactly sure) and full of detail and articulation. He has 4 alternate hands for various poses and the aforementioned Scythe of Doom! Real ones will recognize the scythe as a much reused axe from various uses in MOTU, but it really works well here. Despite the cape and not a robe, they went full spooky ghost/Grim Reaper with the visual. He looks straight up out of a classic scary painting. They really nailed Scare Glow when designing him and this update gives the ghoul a premium update. This is a ghastly toy that as his name implies glows in the dark. I didn't get a picture of that as literally every picture of Scare Glow in Google images is that. I figured you understood the idea.

Unlike most Scare Glow figures, this one isn't mostly white. Normally Scare Glow is more of a buff white skeleton with black detailing. Here instead the buff body is mostly black with the skeleton parts painted on in the glow in the dark greenish white with the same color skull head. This clearly makes him look like a member of The Misfits, but I also can't help but to compare it with that scene in The Skeleton Dance. Either way it's cool. The hands are a translucent black to make him even more ghostly. I'm going to say black one more time. Black. The changes make for a cool update of Scare Glow that still evoke his classic look. You could say it screams his classic look, but that'd be ridiculous.

Scare Glow is a character I've always really liked. In a toy line (meant for kids, weirdly enough) full of demons, scary monsters, and haunted houses... an outright skeleton manages to stand out. That's saying something as the main bad guy LITERALLY HAS A SKULL FOR A FACE. Scare Glow also hearkens back to The Golden Bat's signature looks. When I was younger, it was thanks to Scare Glow that I discovered The Golden Bat. I just kept seeing him and wondered why Scare Glow was gold.

I can really appreciate little things like that. I discovered Usagi Yojimbo thanks to his TMNT figure. Weirdly enough I had an 'expert' tell me there never was one after I said "oh, he's cool, I just really know about him from TMNT". Then was told that never happened. That's not the only reason I try not be be a gatekeeper or holier than thou fan type.... but a good example as to why I don't. I'm no better than anyone... and no one is better than you. So if you want to talk toys, hit me up. Maybe you can teach me something I didn't know. That'd be rad. Know who else is rad? Scare Glow.