Ninjor Will Sneak Up On Your Ass 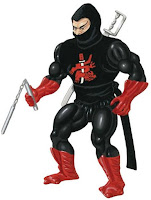 Ninjor was introduced alongside Scare Glow when Skeletor conjured two of the most evil beings from all time and space. As you can see, Ninjor follows alongside the living Halloween decoration motif of MOTU. A standard black suited ninja, but with red devil boots and gloves.

That's because Ninjor isn't a human, he's a straight up demon. That conjuring that Skeletor did was during a special time when the veil between dimensions is weak for one hour (Halloween at 3am?) So what I'm saying is Skeletor just happens to have a demon ninja in his ranks. Why not? Carpe diem.