Scare Glow Is A Fright Knight 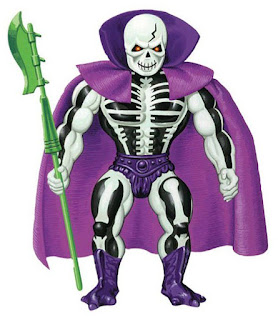 I've made the joke again and again that He-Man fights an army of living Halloween decorations. Since it's Halloween week who else could I feature for my recent weekly MOTU post? Non other than Scare Glow, an actual ghost who works for Skeletor. Or is he Skeletor's ghost?

His toy's tagline describes him as 'Evil Ghost of Skeletor!', which lead folks over the years to believe Scare Glow to be in fact the future ghost of Skeletor. Since he (and Ninjor) were pulled from the future via a magic spell to join the Evil Warriors. He could be right? However the taglinewas just used to imply ownership and he just happens to be a ghost from the future employed by Skeletor. Because Masters of the Universe.

In U.K comics he cannot be seen during the day, only by night. Which kinda works and is a little less outright scary than a freaking ghost sold to children. In the early 2000's series he was used in a Halloween comic and in Origins they went more into his prior life as a bounty hunter in the toys bio. As you can see, Scare Glow is pure scary shit. The toy is a glow in the dark skeleton with a purple cape and Scythe of Doom!

He's a popular character and has had a few toys. Original, Classics, ReAction, Origins, Mega Construx, Funko, etc. Even the Masters of the WWE Universe line has a variation of him as The Undertaker. It's kind of funny how one of the last toys released during the original Masters of the Universe toy line became on of the most popular. If you're going to go out, go out with the perfect example of a MOTU figure.