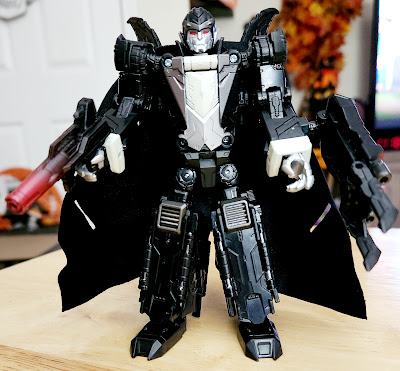 "Halloween is my national holiday!" Dracula proudly exclaims in 'The Halloween that Almost Wasn't/The Night Dracula Saved the World'. Truer words have never been spoken and there's no better time to look at Dracula's Transformers debut as Draculus. The Universal Monsters are something I truly love as readers know and as an older post would tell you, something Hasbro tried to work into Transformers in the past. Draculus is ultimately the culmination of that idea finally seeing light as he is an Official Universal Monsters crossover with Transformers. Neat, huh?

As with most crossovers the fiction is pretty light with just enough to briefly explain why Dracula is a Transformer now. Dracula was augmented with Transformers technology changing him into Draculus. Draculus is a Decepticon Vampire who drinks the Energon of the living! Admittedly it's a little silly... but what would you expect? It's meant to be a fun thing and it is a fun thing. Draculus is a remold of the Titans Return Mindwipe toy. His chest now looks like the traditional suit wearing chest of Dracula and in the new deco it pulls that off pretty well. His new head sculpt looks like the more modern Dracula art Universal uses, only robotic. Also of note he has open hands as opposed to Mindwipe's closed fists. They didn't have to do this, but it adds to the figures overall look.

With the new head, Draculus is not a Titanmaster/Headmaster like the original toy. While this simplifies things part of me really wishes he was. It doesn't take away from the toy whatsoever, part of me yearns for a Dracula piloted robot as opposed to now Dracula just being a robot. The bat's cockpit is also molded over in case you wanted to stick somebody in there. Draculus retains Mindwipe's weapons. Though now the weird shield thing that's made from the bat tail is called the Impaler Claw. Thus making me love it now as opposed to only tolerating as before. The gun isn't really any different other than being all black like the Impaler Claw. Just with a red tip for a little extra color. I'd like to think he shoots fire from it.

You can't have Dracula without a cape even if he's a giant robot, so Draculus has a cape. While I really like the idea and look of the cape, I didn't enjoy using it much. There's nothing wrong with it. I didn't enjoy the process of putting it on. That takes a bit of fiddling (or at least for me it did) to get in place. In robot mode, it does make for a cool cape and adds to the overall fun something like this should be. In bat mode the cape fills out his wings and makes them somewhat more natural looking. Really tough, it's a robotic bat. Realism isn't super important to me. Speaking of bat wings, while the toy has some more rubbery parts than it's original mold does, the cracking wings remain to be an issue. While I haven't had a problem with my various instances of this mold, you might. I might eventually and this was a harder to get toy. So I'd like to not break him. Be careful with yours.

Draculus is a very cool toy that came out weirdly AFTER Halloween last year. So I've held off talking about him much here until now for obvious reasons. They did a pretty great job taking one of the more spookier Transformers and making it into an even spookier monster Transformer. Not to mention, it's fun. Draculus is a diversion in the status quo of Transformers and I enjoy such things. He even comes in VHS box style packaging for extra cool points. It's Halloween and Draculus would like you to know it's his national holiday. I can't think of a better toy to talk about as we're approaching the big day. If you can find one, get one. It's a cool thing to own. 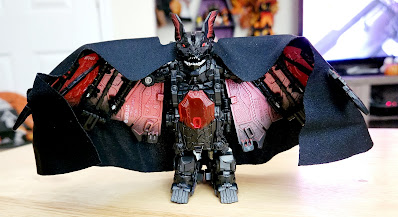