Optimus And Freinds On Netflix At Walmart 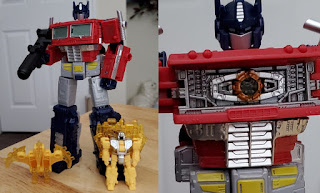 Another of the Christmas gifts from my wife is the Netflix Optimus Prime set exclusive to Walmart. Like some of the others in this line, Optimus comes with some Battlemasters. It makes for a really cool set and still makes we wish the Netflix War for Cybertron series included them as well.

Optimus is the Earthrise version sans trailer. It's a really good toy. I've talked about it here before and that didn't keep me from wanting it again. His slightly different colors make me think of that one G2 version. Which I've always liked. This is just a really good Optimus Prime, I kinda want them all. 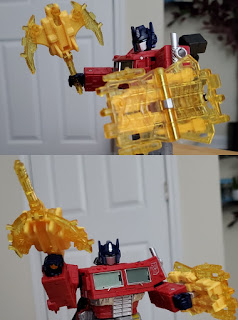 Enerax turns into an energy axe or laser gun. What makes this neat is that his robot mode is a pterodactyl instead of your standard humanoid robot. It's always been pretty cool when Transformers have non-traditional robot modes like this. Enerax is also in that great yellow scheme like Sheeldron. Yes, those are some awkward names. I wish Enerax was Sundor. Another clear yellow bird Transformer.

The addition of the two makes for a more savage Optimus Prime wielding an energy axe and shield in battle. Mentally skipping past the Netflix series, I could easily see this team up on some cosmic adventure. It's visual says Marvel to me more than that War for Cybertron. I love this Optimus toy and partner figures with it just makes a lot of sense. There's literally nothing bad I can say about this set and a million good things I can. Go buy it. 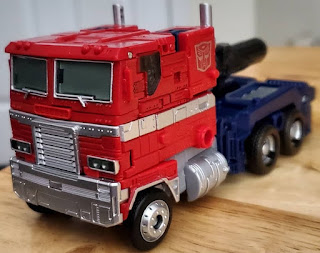