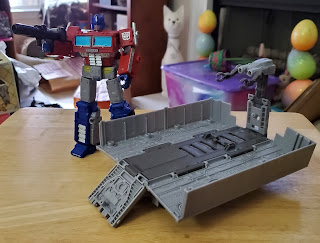 The last of the new Transformers my wife had given me for my birthday was Earthrise Optimus Prime. Like other Earthrise toys, he is traditional G1 upgraded. I've often said more recent leader class toys are the next step to Masterpiece. With Optimus here, the comparison isn't far off. Prime seems like a downgraded Masterpiece, just enough reduced to make him fit a lower price class.

Optimus turns into his traditional flat nosed tractor trailer. You've probably noticed that his robot mode is more angular like his cartoon appearance, while the truck is boxy. Thanks to some tricky unfold-able parts, both looks are intact without sacrificing one for the other. Normally additional panels make for a difficult transformation, but not here. There's just enough panel-forming to get the job done without opening a portal between dimensions and inviting Pinhead into your house.

I really appreciate the trailer making a return here. You don't always get a trailer with Optimus anymore. With this being such a G1 homage, it would be a shame to not include his signature trailer. I also really appreciate just how close of an approximation of the original trailer it is. The robot drone lacks his firing missiles, but the ideas there. It's such a good recreation that I find myself missing Roller. I know there had to be cuts, and that's the deepest one. The trailers door can connect to Micromaster base connectors and even features a removable shield for Optimus to wield (I forgot to take a picture).

True to cartoon form, Optimus can open his chest panels to reveal the Matrix! It's a nice little extra and can even be removed for some darkest hour lighting. The cherry on top of a really good sundae of a toy. Even with his panels, Optimus just transforms naturally, like an evolution of his original toy. I knew going in that this was going to be a very traditional looking toy, but didn't expect it to be such an upgrade of the original toy. Dang, Earthrise is good right out of the gates! 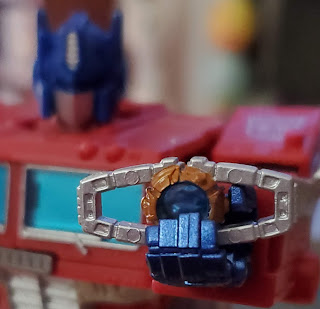