DDT Stands For The End 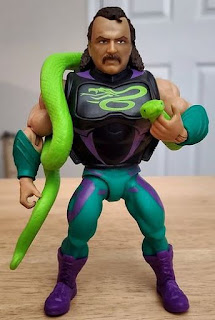 Masters of the WWE Universe is a weird toy line. I know I've talked about them before here, but it's one of those concepts I can't help but to describe each time. Are they wrestling figures or He-Man toys?

These are literally MOTU Origins toys with wrestlers as characters in an alternate timeline. I'd been really wanting to get a hold of the new Jake the Snake Roberts figure since learning about him. Jake is one of my favorite wrestlers of all time and I was instantly sold on him being in the MOTU ranks. Thankfully, the wife got me one for Christmas. Or as she said, she got me a weird old man toy.

Playing into his scary guy who carries around a snake gimmick, Jake is WWEternia's answer to King Hiss. In human form, Jake pretty much looks how you'd expect. With MOTU style armor decorated like his tights carrying his trademark snake. I'd like to think it's Lucifer, not Damien. 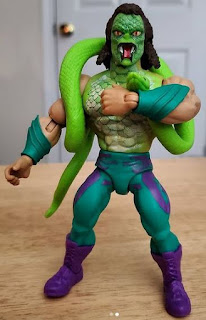 But remember, you can't trust a snake! By removing his armor and mask a reptilian freak is exposed! A reptilian freak with a mullet! I've mentioned a million times about how Masters of the Universe is a bunch of Halloween decorations. This is literally a toy of a person who removes his disguise to reveal a demonic true form. It's January, doesn't matter, trick or treat mother fuckers.

If you haven't gotten you hands on a MOTU Origins figure yet, let me explain one to you. Imagine all the charm of an original He-Man figure with modern day articulation. They're literally using Origins molds to make these with oddball WWE parts and whatever other stuff they have laying around.

Jake might have the most original molding with his face mask and reptilian head. I'm sure the snake is from other figures. The armor is the same that came with Macho Man, but sans the additional chest plates for battle damage. I kind of wish he came with a weapon. The snake works, but a knife would have been perfect.

Jake is an obvious choice for a Snake Man on WWEternia. I really like the playing up of 'one with the darkness' into his overall presentation. Jake always seemed like that guy in a random episode of Tales from the Darkside. The shady dude in a silk shirt, cowboy boots, and was involved with a voodoo priest. Later who turns into a snake to kill the guy who wronged the voodoo priest. Or I guess that guy from the old PSA. Come to think about it, I always saw that during Tales from the Darkside. Dang. 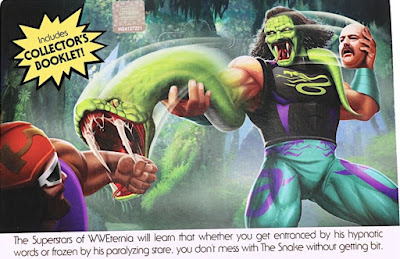