A Barrier For Sound 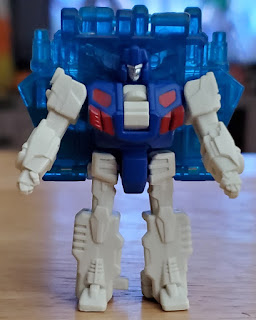 I picked up Soundbarrier in June shortly after moving. Like other toys bought during that time, I've just gotten around to opening him up. Soundbarrier is a Battle Master from Earthrise which makes him a tiny bit different than the ones from Siege. Instead of a weapon, he turns into a shield and a connector for Micromaster bases.

I had been looking forward to this guy as he just looks neat. The shield kibble on his back looks like wings giving him a much cooler look than somebody who turns into a dock plate should look.

The bright blues with the grey robot parts with accenting red makes for a sharp looking little robot. I'm sure this mold would look good in almost any color you throw on it. He looks like he turns into a jet almost. 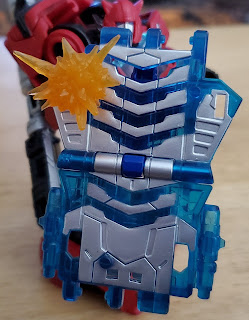 I mentioned he turns into a shield right? Two things, he does in fact turn into a shield and I've had to right click on shield every time I've typed it. Clearly cannot spell that right. Considering it's basically just a dock plate that doubles as a shield, it doesn't look too bad.

He comes with one of those blast mark thingys and two places to connect it. So you can have him being a barrier for blasts as well as sound.

There's some silver paint here that's pretty nice looking and dresses it up a bit. It mainly dresses up dock plate mode and adds to the appearance when connected to Micromaster bases.

Not to mention is helps hide the robot hanging off the other side in clear view. You think Micromasters flip him the bird when they drive over? You know they do. 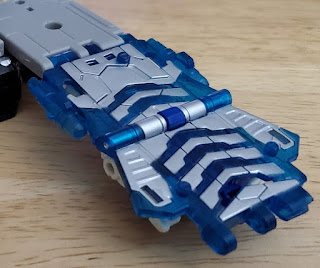 In dock plate mode, he can connect to any Earthrise Micromaster base or so they say. He can serve as a connector to provide a road from one to another or a ramp for driving up or off. You can still plug the little blast effect thingy on here to make it look like somebody is shooting at Big Daddy.

He's Autobot in Hasbro releases or on the Japanese side a Selector like Smashdown. Considering his alt mode, it's a good fit for the new group. I could imagine a dock plate having enough of others bull crap and revolting.

I say that about everything.