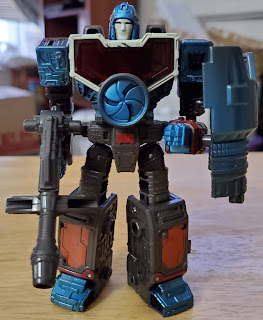 While I was at Walmart getting that mystery box I've been talking about, I also picked up Scrapface. The seemingly only new character in the Netflix Siege figure line (so far), Scrapface is a repaint of Refraktor. While you can combine three into the camera, I was happy to just get one. I haven't seen the show yet, so I don't know who Scrapface is. It might be safe to assume he's the generic Decepticon trooper similar to generic clones of Reflector in the original show.

Scrapface is clearly a homage to Scrap Iron from GI JOE. That's a pretty nice touch that they didn't have to do, but I'm glad they did. I've always liked it when generic soldiers in Transformers are treated as individual characters in the toy line. You can either own one specific dude, or an army of many. Scrapface turns into an artillery hovercraft. That's a fancy way of saying they kinda sorta came up with something. This is a way of selling an individual figure on it's own outside of the camera combination mode. It's not terrible, and makes me think of those things Skeletor rode on when he attacked Charlie's store.

Transformation is pretty basic as you just move things around a little. In this mode Scrapface is doing planks with his accessories creativity placed. No wonder his abs are so tight. The metallic blue looks really great on the mold. So does the red. He's clearly a combiner as the toy is a little basic on it's own. There's a pleasant amount of articulation, not a lot. If you didn't know he was part of a camera, however, you could probably just go on never knowing it. Not too shabby.