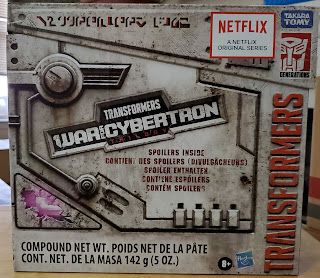 This past weekend I picked up the Transformers War for Cybertron 'Mystery Box' from my local Walmart. Like all the other Netflix Siege toys, it's a Walmart exclusive. It looks like an ammo box, which feels pretty appropriate for the subject and toys inside. Not to mention, it looks pretty cool. The spoilers inside as noted on the box are generally in the form of the text under the box flap. It's in Cybertronian and I didn't take the time to translate it. Probably something about Ovaltine.

If the toys inside count as a spoiler, well first off go yell at every Transformers news site, then be advised that I'm going to talk about the contents over the course of two posts. There's a lot too talk about here and dude, it's a holiday week. I'm a little checked out right now. So it's probably best to split it up instead of one giant post. Which the first will continue under the break, because I'm trying to be considerate of those potential spoilers.

Since the box is an 'ammo box', the correct way to open it is via the lid on top of said box. It's within that lid you'll first find that spoiler heavy text in a made up language. Also, a sealed square container of black Play-Doh. Part of me is absolutely delighted for such an absurd addition to my big Transformer box of mystery. Part of me is absolutely tickled that black Play-Doh is technically a Transformers accessory. The other part knows something is inside said Play-Doh and wonders about Hasbro's recent fascination with hidden stuff in Play-Doh. Their Lost Kittens line has the same thing with stuff inside poop colored Play-Doh. 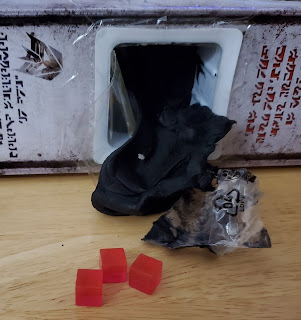 After digging through the clay, I found the mystery baggie containing three Energon Cubes. I'm not sure if these are from the same molds as the ones that are usually included with Insecticon reissues, but they look like it. A nice little extra and man that murky black Play-Doh sludge is neat. This is a big black wad of clay and digging out the cubes was pretty satisfying. Makes me want to go grab a few cans of the stuff and just mush it around. 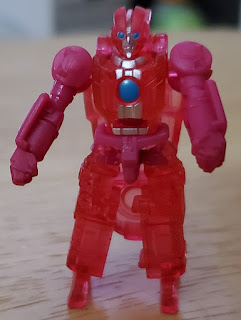 After you get done cleaning the black clay out from underneath your finger nails, inside the box is a tray containing two bots! One I'll cover later and the other is Battlefield Rung. This is the same Battlemaster as the standard Rung toy except in a combination of translucent and opaque pinks. I guess looking like a glass of raspberry lemonade is what makes him Battlefield edition as opposed to regular Rung. It does look pretty great though.

With the laser shootin' effects added on the gun barrels, I get a strong ectoplasm vibe. That darn pink looks super good here. If I had any complaints, it's that I wish the other colors were a different color to make contrast more stark. Like I can see a blue on those opaque parts playing with the translucent pink really nicely. Either way it's a great look for Rung. Tomorrow, I'll continue this post with the main event figure of the box. That's his hand holding Rung in said picture and you likely already know who is is... but I'm having fun with it. Check back tomorrow for part two of my nonsense on this box's contents.