Bot In The Big Grey Box

Surprise, the other toy from the mystery box I talked about yesterday is Ultra Magnus! I'd continue the spoiler warning stuff but every news site told you this already. That and his picture is on the box. Honestly you probably knew all the other stuff I hid under the break yesterday, but sometimes you just want to put a big ass post under a break so it doesn't dominate your front page. Like the one I just put here. 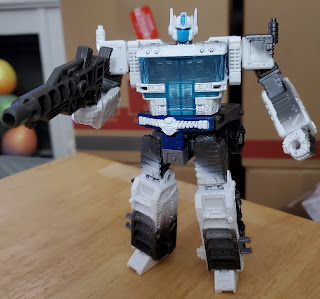 Ultra Magnus is a repainted version of the standard issue one from Siege. Repaint technically as he's still pretty similar. While the original version had 'battle damage', this one looks scorched. Like he was just in an explosion. I didn't translate the spoiler text so I don't know if this is from the show. I can't tell how similar the colors are to his original toy and mine is packed away currently (hence the boxes in the background, I'm moving). They look a little different, but that could also be the difference between 'battle damage' playing in. 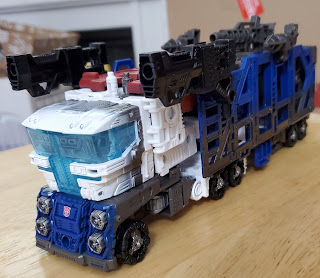 I hate to spoil this for you, but Ultra Magnus turns into a big ass truck. Normally the type that carries cars down the highway and you'd rather not be behind. Final Destination yo. Siege is intended to represent the Transformers on Cybertron, so Ultra Magnus turns into a spacey big ass truck with a ton of guns that kinda looks like his vehicle mode from RID. Fortunately it's not as frustrating to transform.

Ultra Magnus in his white cab mode is the traditional white Optimus Prime robot playing back to his G1 toy quite nicely. I've always been a fan of that white cab mode. The parts from his armor parts-form into his trailer. It's not too fiddly, but is a bit tedious. You either line it up right or get it wrong. The truck looks cool, though with each version of this mold (both UM's and the Optimus) I could never get to roll smoothly. Not sure if that's just me not tabbing it together right or... it's probably just me. Dammit. 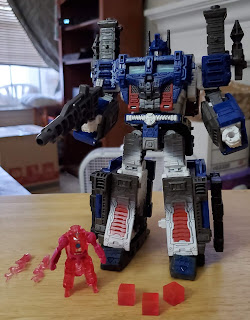 The armor fits pretty well onto the base robot to form Ultra Magnus in his big robot mode as you know him. One thing I've liked about Siege is that mix of traditional G1 and the spacey sci fi look. Ultra Magnus looks straight out of season 3 with a truck that's more at home on a war torn alien planet. While I do wish this exclusive version was in Diaclone colors or something more drastically different, the scorched look is really sharp. Including all the other neat stuff in the box and you get a pretty nice gift set. I've always been a fan of Ultra Magnus and getting newer toys that are so faithful is great.
at May 28, 2020
Email ThisBlogThis!Share to TwitterShare to FacebookShare to Pinterest
Labels: diaclone, exclusives, Generations, Netflix, siege, toys, Transformers, Ultra Magnus, Walmart, War for Cybertron, war for cybertron trilogy, Zone Base