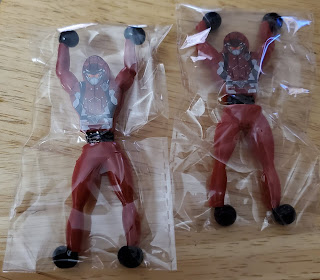 Hey, know how I was at the Dollar Tree the other day? Well, I also got some more Wall Walkers. I had been getting the Transformers variety and if I liked current WWE performers (I don't) I'd probably grab some of those. They're a silly fun blind bag toy for a buck each. I didn't expect to see Beast Morphers in the selection and the surprise of it made me shit my pants. Not literally, I'm joking. You gave to spell things out for people sometimes. 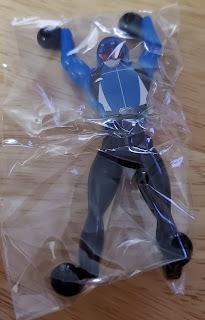 I grabbed four packs. These aren't the kind of blind bag I go crazy over and try to complete the set. These are the kind I'll grab a couple of and hope I don't get too many doubles. Speaking off, I'm like 4 ghosts away from completing the Scooby-Doo Playmobil series and each new shelf box has new codes... it's pretty frustrating. Dammit. Just like the others in the Wall Walker toys at Dollar Tree, the Beast Morpher versions are colored plastic with decals to distinguish each character. The body shape of the walker doesn't look too silly on the Power Rangers as they're people in spandex normally. In fact they make for pretty good representations. 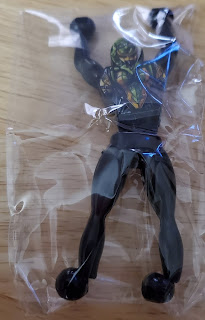 I got two Blaze's, one Roxy, and one Blue Ranger. Not bad. If I were to get two of a Beast Morpher, I'd rather it be Blaze. I like him the most out of the characters. His bat armor looks cool. Just like the Transformers versions, I'll be grabbing a few of these on trips in the Dollar Tree. I've really liked Beast Morphers, it's in it's mid-season break of it's last season. I'm sure I'll enjoy Dino Fury next year, but currently I'm just not as excited for it as I've been for Beast Morphers. Guess I'll just have to throw it to the wall and see if it sticks.