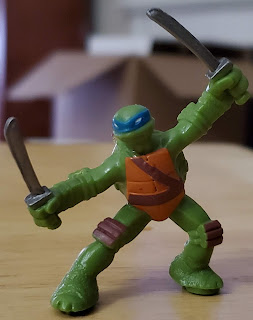 I sure do enjoy me some TMNT, but it can be a complicated thing to enjoy. Multiple versions, things change, I change. I've admittedly went back and forth between which version of the turtles I prefer at the moment. I generally hover between the original cartoon, the original comic, and the original movies. I do like the newer cartoons/movies, just not as much as the ones I listed first. It's just a preference. 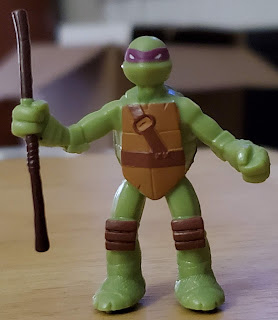 I don't have to explain to regular readers my love of mini figures or discount stores, but if you're new, I love them. For some time I was eyeing a set of TMNT mini figures at Family Dollar for around $6. That'd get you a turtle and another character toy. The turtle was a pretty good approximation of the original Playmates figures and I wanted them pretty bad. However the other figure were based on newer figures and frankly the sculpts didn't do it for me. Not that they were terrible, it was just jarring enough for me to not want to spend the $24 for all 4 turtles when half the package I had no urge to own. Recently they've been refreshing the sets with newer figures based on the Nickelodeon cgi series. 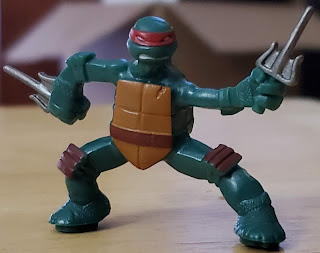 The cgi series isn't bad and tends to homage itself more on the original cartoon. So these new mini figures from it make for a good set of turtles I'd like, but once again, they come with those other figures. The Dollar Tree, tends to feed my blind bag toy and mini figure hunger on frequent visits and for not a lot of money. I'd like to take a second to explain I just misspelled 'and' and my efforts to correct it resulted in many more misspellings. Fuck you 'and'. 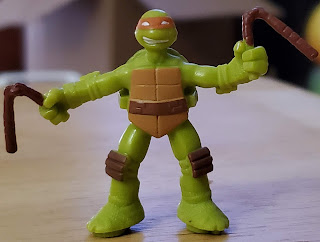 The Dollar Tree had the newer figures individually packaged for a dollar each (it's kinda their gimmick) and talk about an easy sell. I really wish the set I was speaking about earlier was available for the same, but I'll gladly take these little guys. They're simple little figurines of the turtles with basic paint jobs in 'action' poses. Kinda look like something I would have gotten in a box of cereal and now I wish I would have. Because that would have completed the set going in blind. Achievements would have been unlocked.

If the boxes in the background didn't serve as a clue in addition to my multiple mentions, I'm moving. My current plan for these little guys is sticking them next to my micro consoles in the new Zone Base headquarters. Or maybe next to the little keyboard tablet set up that'll go in that room somewhere. They're just the right little thing for such a set up. Cowabunga indeed.