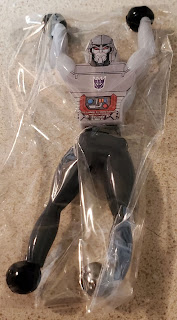 The Mrs. surprised me the other day with some blind bagged goodness after a stop by the Dollar Tree. They were Transformers sticky wall walker toys blind bagged in Authetics packaging. I was aware of these prior, but all my stores ever have in these are the WWE ones, so I was happy to get my hand on these sticky little guys. She bought me five and I'm sure to get more in the future. The Dollar Tree is already a guilty pleasure of mine and this is a pretty good reason to stop by other than those Arizona nacho trays. 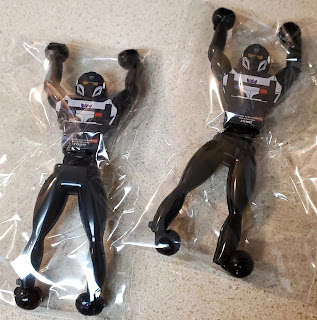 I got Megatron, 2 Starscreams, and 2 Barricades. Barricade is the odd man out here as I was lead to believe that he was Soundwave with the wrong name on the bag. Opening him up though reveals a modern police car based Barricade. He does have Soundwave's head however, I wonder if there's some part switching and Soundwave will pop up in another batch. Maybe even Prowl.

As you can see the toys are very basic. They're plastic upper and lower bodies in an outstretched position with a piece of rubber in between sections. Where the hands and feet would be are sticky balls. Like the wacky wall crawling octopi of the past you fling the toy at the wall and watch it flip its way down. Character depiction on these is basically printed stickers and colored plactic. 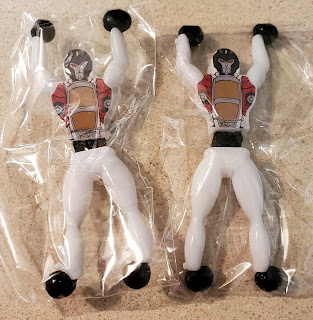 Not as cool as the bag clips and minifigures of Transformers at Dollar Tree stores this past winter, but still pretty neat. The toys are really basic and it's pretty hard to expect them not to be. The actual toy is the wall walking gimmick. Having characters on them is pretty much a plus. For a dollar, they'll be a fun blind bag item to grab on trips to the Dollar Tree. Those and those bad ass Arizona nacho trays. 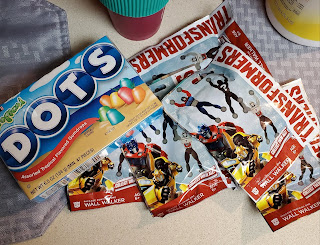