An OldOne on this Friday the 13th 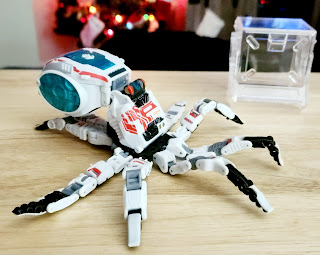 Horror of the deep, 52TOYS BeastBox Series OLDONE BB-44！Slumbering deep under the ocean, no one will believe a box as ancient as the OLDONE exists. Once awaken, his CPU programming will unleash tentacles upon unsuspecting ships and drag them all to a watery grave...

No better time than Friday the 13th to take a look at OldOne. OldOne is a BeastBox figure by 52Toys. Really cool designer toys that turn from beast mode to box mode (there is some some modes as well). It's really satisfying to see something like a robotic dinosaur convert into a pleasant little box as well as a return to the old school transforming robot toy shapes.

OldOne is a really well done robotic Kraken with a Lovecraft name. Nothing like a legendary sea monster that could possibly be from beyond our scope of reality. The robotic design add some really cool looks as well. Despite the 'beast' in the name, don't think Beast Wars. Think Zoids. They're very similar to Zoids in visual presentation and frankly they just look fucking awesome. A squid is probably the last thing you'd think of when the idea of transforming into a box... and OldOne is a little tricky getting there. All those tentacles fold up exactly right and mostly fit into his head while doing so. Thankfully, they're heartily articulated. They can bend all over the place in a million different ways. It's super satisfying to do so. I've said satisfying twice, because that's the best word for it.

I had been eyeing these Beastbox toys by 52Toys for awhile now and have no reason or excuse for why I haven't bought one before. I thought they were neat but just didn't get any. My wife bought me Oldone after discovering them on Amazon and asked me about them. I was instantly hooked and used some Amazon gift cards to buy a few... and I'll be getting more in the future. These are great. Apparently, there's a bonus brain module for OldOne that sometimes comes with the toy. I'm not sure what the occasion for getting one is, mine didn't include it. It looks like one can be acquired separately. I'm really happy with Beastbox and can foresee a lot more of them in my future. 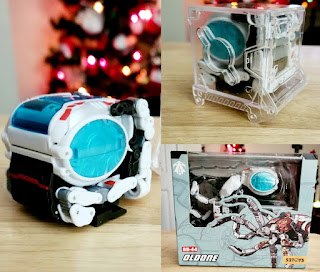