Full Circle of the Moon 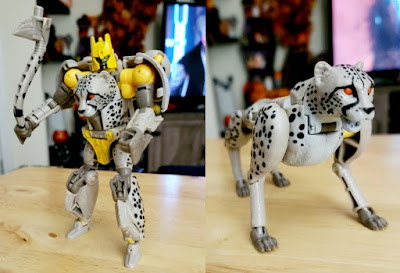 I don't know about you, but the first thing that pops in my mind when I think about Halloween is a snow leopard. The Halloween Horrorcons were one of the first Halloween posts I wrote on the site. In short, they were a planned Halloween Walmart exclusive set during the original Universe line that got canceled. Fortunately two of them have been homaged in Legacy. This one is a Walmart exclusive. I'll get to the other later. After all, everyday is Halloween on Planet Zone! It's in the site description... duh. Today though, today we're going to talk about Nightprowler. Older readers will remember that Halloween Horrorcon was the original naming of the spooky season here on the site. Clearly this one is a big deal to me.

To some people, this might just seem like a throw away repaint. It is a pretty obscure character that technically doesn't exist. They could have made Prowl for obscurity points and had a more recognizable name. Obviously I love it. If you heard a scream around the time it was announced... that was me (sorry). Legacy sure is a cool Transformers line. It cherry picks from random places in Transformers history to really create fan friendly and still fun updates. The store exclusives go a level or two deeper. This is the kind of thing I'd want as a fan club exclusive. But things like the Velocitron Speedia 500 and Buzzworthy Bumblebee have done it better at regular retail. That's pretty awesome.