Score One For This Cool Cat 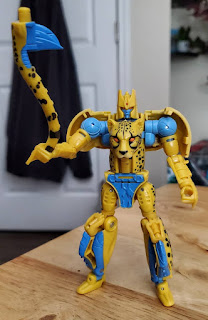 Oh hey, when I got Rattrap, I got some other Kingdom figures. Cheetor here is one of the new bots I absolutely needed to have. I mean, I need all the new Beast Warriors, but Cheetor was a priority. He's always been one of my favorites from the beast years and honestly one of my favorite characters. So I'm easily sold on new toys of the guy.

This new Cheetor is a really good update of the classic design. In beast and robot modes he looks like he walked off the cartoon screen and onto a TV tray in my living room. I'd like to point out that I capitalized TV, because spellcheck goes nuts whenever I don't. Happy now you toxic asshole? Where was I? I love his head sculpt, you know Cheetor was originally intended to be Prowl right?

This new toy features a bunch of articulation. He bends and twists in all sorts of ways. I do wish the designers would have included the gut and tail gun, instead they opted for the tail weapon from his Transmetal toy. It's not bad, but for such a good homage, the guns do feel left out. That's the closest I have to a complaint about this guy, and it's just a minor nitpick at most. I'm totally happy with my new Cheetor. His transformation is natural and everything just works for me. It's pretty great. 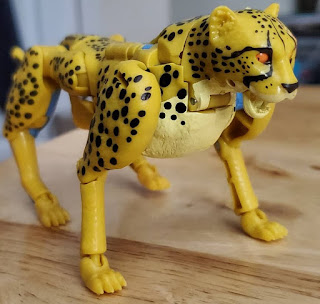