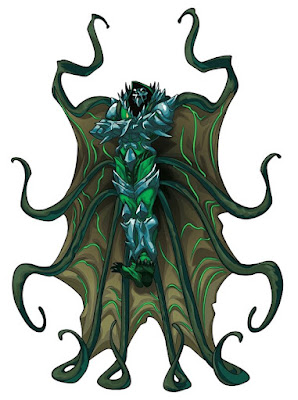 As we're heading into the Spooky Summer, Marvel Mech Strike is taking a rather nasty turn. Mech Strike Monster Hunters is the new expression of the line that's taken my attention completely by storm. I was already enjoying Mech Strike (I do need to get a few more toys though) and seeing it go whole hog into a monster theme is just wonderful. Dr. Doom is using the 'Eye of the Kraken' to give himself some ghoulish new powers that he's shared with his fellow evil companions. The Marvel Heroes have no choice but to use the Eye of Kraken on themselves to combat this threat! Now their mech suit enhancements are full of supernatural powers!

The delightfully monstery new toys are wonderful. There's a range of action figures, role playing toys, Funko pops, and other merchandise with this cool mix of monsters and mechs. I'm mainly here for the action figures, but maybe tempted by other stuff as it's all so cool. The larger mech suits have changed since normal Mech Strike. Instead of a pilot figure that fits inside the suit, the line features larger mech versions of the characters. I'm not complaining though as the toys are solid. The addition of horror really ads something, and not just because I'm crazy about this stuff. It almost has a Ultraman slant that works pretty well. I could definitely see a tokusatsu show based on this.

The bad guys are obviously the more monster flavored, while the heroes have a more knight like appearance. I see a lot of Lovecraft in the designs of the bad guys. I'm sure that's the idea, the Eye of the Kraken (itself used in gaming before) does hint at ancient evils. With some of Lovecrafts works not aging very well (it was a different time and can be rough sometimes) I'm sure Disney/Marvel would like to keep potential problems from popping up. There's a comic as there was with Mech Strike. I haven't read any of it, but may. Personally I like my little head cannon that I've formed. Which is really just the lines basic description but with zombies and skeletons. I'm a little ridiculous.