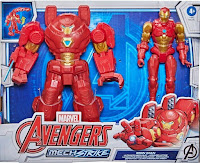 I saw the damnedest thing Saturday morning. The wife and I made a quick run to Walmart for a few things and whilst looking around the toy section hoping to find a Mechagodzilla (man that movie sold some toys) I saw something new. Avengers MECHSTRIKE! There was NERF role play themed toys and two of these new MECH suit sets. Captain America and Ironman. I grabbed a Captain America as I was just blown away by it all.

A quick Google search later and I discovered MECHSTRIKE is a new major event in Marvel comics that's getting a bunch of merchandising including these new toys I found. My days of heavily reading comics has been over for awhile, so I had no clue. The action figure line though has really captured my interest. There's the MECH suit sets I've mentioned as well as regular action figures. The standard figures have a more sci fi look to them to fit the theme and have nifty shields that I'm sure play into the story.

There's an obvious comparison to Transformers Pretenders when you first look at the toy, but it's a little different. The front opens with a hinge on the top of the suits head and you load the figure in. The figures arms hang out the sides of the suit as well. That's not a deal breaker for me, but maybe for some.The figure is pleasantly articulated and you can put it into a bunch of poses. The suit... not so much. It has basic articulation in the shoulders and elbows. Once again that might be a deal breaker for some, but once again not for me. I really liked my Captain America MECHSTRIKE toy and plan to get more.

There's a variety of ports on the suit, so I assume the idea is to attach things from other toys and deck out your MECH. This isn't the first time Marvel characters have been given this type of gimmick and it usually works well with them. The figures are the 6" scaled figures more recent Marvel figures have been, which has resonated well with me. In the suit, the toy is 9" and is pretty beefy. It's cool and even in it's simplicity manages to grab a lot of attention. It's that cross of bright colors, manga/sci fi theming, and well loved characters. So far I think it's pretty great. You may have noticed. 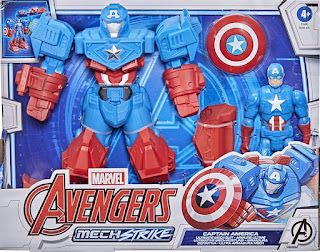