A day with Shockwave 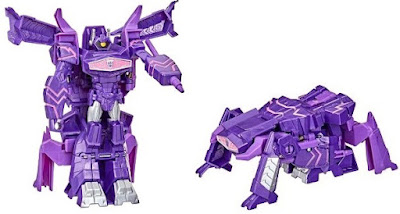 About 2 weeks ago as you're reading this, I finally bought a Turbo Changer Shockwave. I'd been wanting this figure since it came out in Cyberverse and for some reason never got it until recently under it's re release as a Buzzworthy Bumblebee figure. I've made my love for these simple figures know often here, so I'll spare you the details, but he's a pleasantly old school vibe robot toy. A week later after buying him, and a week before you'll read this, I opened him. I've got a pretty good backlog of unopened toys and the bulk of posts here are written in advance. I'm sure I've explained that one here as well, but thought I'd repeat it in case that wasn't clear.

I've spent all the day with this Shockwave by my side. I work at night (I'm also sure I've said that before), and it was a Monday. I woke up early to see my wife off to work and spent the day doing odd tasks between goofing off and napping. Monday's for night shift folks are like Friday evenings for day shift folks. Shockwave got transformed a million times. If you look at the delightfully buggy alt mode, you'll see those rear legs. Squeeze them to auto-transform him into bot mode, pull them apart to go back. What kind of insect is he supposed to be? Maybe one of those flat grey ones I always see on my porch?

I spent a good deal of time playing Dig Dug 2 on my Switch. By my chair was a TV tray (the one from my Instagram). Shockwave stood there next to my Galaxy Tablet. When I wasn't playing, the pro controller would sit there with the two. I really wish this toy would get re released in different colors as someone else, just so it could get a little more out there. He really feels like a lost Beetras/Deluxe Insecticon. Maybe with a new head or in different colors he could be a new one.

He was by my side as I finished the current (and sadly last) season of Pacific Rim: The Black. Overlooked the making of my lunch that consisted of some tortilla pizzas and grapes. What's a tortilla pizza? It's a little pizza you make on a tortilla instead of a crust. I'm on a low sodium diet. With the right sauce, cheese, and tortillas, a pretty easy lunch that's tasty and also nothing to worry about. He found it logical to add some Mrs Dash prior to cooking. I thought it was a pretty good idea myself.

During another round of Dig Dug 2... have you played it? It's really fun, I like it a lot better than regular Dig Dug. But anyways, while playing I found myself thinking Shockwave would be at home in an old 8 or 16-bit video game. Probably as a bad guy in some space shooter, his design would make for an excellent general soldier. I can really see him on the cover in that old school painted art style. If this really was an old toy, he might have actually popped up in one. Unofficially of course, but there he'd be.

I'm at work now as I write this. Just sitting at my desk working, typing out a few lines here and there between working. Sipping on my water flavored with orange-vanilla Mio. About to eat my little Ziploc baggy full of low salt Ritz crackers that I'll dip into a cup of peanut butter. It's the simple kid, not much sodium. Kind of wish I'd have brought Shockwave with me. Not sure why I didn't, there's been plenty a work night with a Bumblebee nearby. I'm not sure if you're interested in getting this Shokwave toy, but he's good company.