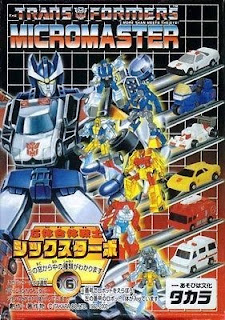 A time I truly miss in Transformers is from of the early 2000's. Takara started re-issuing the Micromaster combiners from late G1. Instead of gift sets, the figures would come in blind box style packaging with each combiner team serving as a series. There would be a little hole in the bottom allowing you to see the number of each member on an insert, so it wasn't a totally blind box. The insert would be a generally informative set of instructions, who all else was in the set, and a short pack in fiction. However the number wouldn't be much of an indication of you got the regular toy or the chase color version. The line would even include Landcross whom was sold as a DX Micromasters.

A Micromaster combiner team (gestalt style, not the two vehicle combiners) would consist of six robots with a unified theme. There would also be the various combiner parts included with the figures that you'd need to form the main robot after completing the set. Those combiner parts would also assemble a flying vehicle of sorts your Micromasters could pilot. The originals were normally sold in a singular box (for the most part), however in this line came individually sold in the a fore mentioned blind box.

The boxes would come 12 to a display box that'd sit on the counter of a store. These display boxes were generally how you'd buy them online if you weren't in Japan (like me). Some sties did sell them individually, but it usually was by the display box that they were bought. Enough to complete two sets of the teams would be in that box. Perfect for trading or selling. The reissues didn't have stickers like the originals, instead the details were tampographed on. If you find yourself wondering if you've found an original, that's the easiest way to figure out.

Above I mentioned the color chase versions. That's because there would be an alternate version of the team in the set. Generally in solid colors and sometimes with a faction swap. They were highly desired and generally you'd get about 75% of one in that box, leading to some trading or buying extras to complete it if possible. Later Hasbro would release these teams under the Universe banner. Individually packaged and usually exclusive to Kay-Bee Toys (here, at least) they were mostly straight repacks of the Japanese releases named after classic combiner teams instead of the original teams names. Only Superion and Devastator got new colors and were really nice looking. These are still my favorite versions of Superion and Devastator to this day.