It's a BotBotCon on Netflix 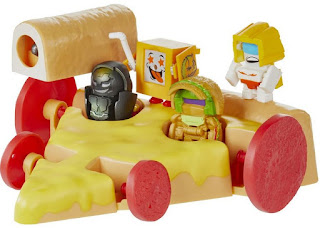 It may have seemed like the glory days of BotBots had passed, but this past weekend the new animated series debuted on Netflix. There's even more toys on the way! It's been a while since I've talked about these fun little bots and that's a shame! The new cartoon is pretty great. Focusing mainly on Burgertron and the Lost Bots having all sorts of adventures in the shopping mall that Botbots hail from.

The law of the Botbots is not to be seen by humans and our main characters accidentally exposed themselves to the overnight security guard. The main characters then find themselves in adventures keeping other Botbots safe from him as well as trying to fit back into the normal society. Because now they're outcasts. If it wasn't obvious, the show is a comedy with no connections other than references to other Transformers series.

While the cartoon doesn't adhere to the toy designs super hard, the toys are still the same with new members joining the ranks. A mixture of new and old molds, these new guys are pretty great. I'm really looking forward to the Pet Shop Tribe figures. Not just stopping at figures, there's vehicles on the way! It's super silly and fun to drive tiny robots around on a car made of pizza. It's also 100% perfect and I love it. I'm glad to see that Botbots haven't faded away. They're too great to not stick around!