I wasn't planning to buy Wendy's GoBots, but by the end of ToyLanta, I owned four of them. Initially I thought I had completed the set, but then realized there was two more. Welp, off to Ebay. Let's talk about them for a minute,they're hella neat. You guys know I love my GoBots and fast food premiums. So, of course I'm a sucker for these little guys. Today is my birthday, so I'm going to indulge myself a little to talk about silly things... as opposed to everyday when I... so yeah.

It's well known that GoBots were mostly made from Bandai's Machine Robo Toys, however these little bots were original creations made exclusively for Wendy's. They're small with pretty basic transformations, but pleasantly fit right on in with your other bots that go. It's a common misconception that they were included with kids meals, but actually they were sold individually at stores for 99 cents with purchase. There were things like story books available as well. Wendy's went all out with this promotion including my favorite extra. The little tray liner had art of the toys with their bios! It's pretty hard not to appreciate the little guys, and I'm compelled to complete the set now that I've gotten most of them. 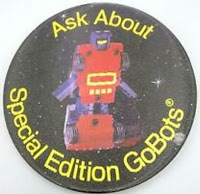