I'm just going to say it. I love this commercial. The slime, the monster hands, the spooky ooky atmosphere. It's perfect! Monster Pretenders were a super cool team of smaller toys with gross rubbery monster Pretender shells. The team combined to form Monstructor, a behemoth among robots. If the rubbery shells weren't gross enough on their own, as they age, they tend to mold! That's probably not the greatest, but you can definitely appreciate the toys living the gimmick. Of all the teams that could use an update, THIS is the set that could really use one.

Part of me wants to think that they could half do it. Maybe instead of the Pretender shells, it could just be robotic monster alt modes or perhaps the robot modes that resemble the Pretender shells like they've done in the past. I might even be ok if they didn't combine, just throw me a freaking bone already Hasbro! 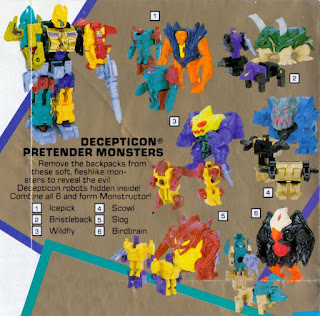