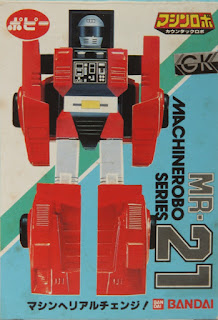 Spoiler is a Gobot that I have a lot of love for. Which is funny as I didn't know his name until I was an adult. I was given Spoiler, but not as a gift or anything. My neighbor at the time who was something of a family friend had found it in his yard and gave it to me. I was pretty unfamiliar with it and after reviewing the back of various Gobot packages decided he was Good Knight. Now before you point out that he obviously isn't, Gobots generally just had robot modes on cardbacks. That and I was 8.

Years later I was corrected and it's good to be. But let's talk about Spoiler for a minute. He's one of the Renegades and really enthusiastic. Originally in Machine Robo, the toy was known as Countach Robo. Spoiler is generally a straight repack of the green eyed red version without the extra stickers. He's a pretty good toy. Fairly articulated for the time (shoulders, knees) and a solid alt mode. Not to mention, there's a lot of die-cast metal that just makes him pleasant in hand. Spoiler isn't one of the more well known Gobots. However he's a pretty good one, just not a Good Knight.