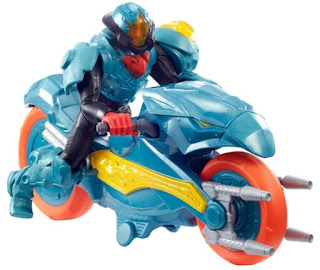 Recently my mother gifted me the Man-At-Arms with Sky Sled set from the He-Man and the Masters of the Universe toy line. I've been a fast fan of this show and the toy's I've purchased from it. Admittedly, I initially wasn't interested in the motorcycle set's I'd been seeing. I mainly want the Eternia Minis and am happy to get a few regular figures (and Battle Cat, whom is awesome). That opinion has now changed after spending an entire day driving this silly little motorcycle around. Let me explain why.

I've always had an appreciation for classic MOTU vehicles. The mixture of fantasy, sci fi, and bizarre designs appeal directly to my tastes. I'm also a fan of clever design. The 'character on a motorcycle' style toy has been ever present in most children's toy lines. So what if instead of sticking a figure on the same bike as the other ones (maybe in different colors) in the series, what if each figure came with a different bike? Well, ok, but what if each different bike was specifically styled after a classic MOTU vehicle? NOW you have my attention.

Man-At-Arms for example comes with a Sky Sled inspired motorcycle. He-Man, the Ground Ripper which is themed after the Road Ripper. Get it? It's neat and pretty well done. The included figures are also standard figures in different decos than their carded counterparts. Usually they come with weapons, however Man-At-Arms here didn't come with his big mace. I'm assuming this is the toy that took a hit for the rest of the case assortment to fit the budget. Considering his design probably requires additional molding, I guess I can see why.

Playing with my new figure across my counter while air frying some lunch, I found myself remembering Spawn Nitro Riders. I was a big fan of this little toy line in the early 2000's. Even though these figures are a little simpler and more chunky (it's not exact). Once I mentally made the comparison, I couldn't ignore the similarities. He-Man Nitro Riders? Sold. Now I find myself wanting more. There's the He-Man and Skeletor sets out there as well as a Trap-Jaw incoming. I wish there was a King Hiss one, just so I could make the obligatory "call me Snake' biker joke.