Run toward the victory Soldier Boy 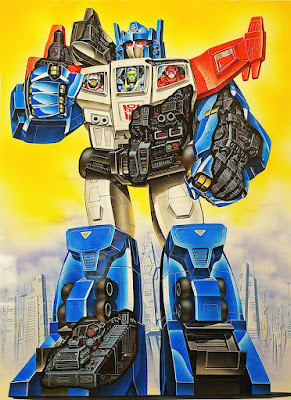 I've spoken of my love of Masterforce here before and dammit I'm going to again. Recently I've been re-watching it, mostly by myself, though the other day while my wife was napping on the couch. She woke up and asked me what I was watching. I just told her robots. We often just say robots in regards to Transformers. She then said 'no, really, what even is this', and I said 'it's my Transformers cartoons'. She still did not believe me and probably still doesn't now. Masterforce is just that different of a Transformers series that it takes people completely by surprise.

Why is it so different? During development, it was decided the ongoing story had reached a natural conclusion and a fresh start was needed. The show is still in continuity with the previous shows and following shows despite of that. It's a little out of place though as it went from the then future, to obviously the late 80's. Sometimes it's best not to dwell on that sort of thing as the show was great regardless. Initially focusing on Pretenders, the show later works in Headmasters and Godmasters/Powermasters into the mix.

The overall vibe of the show is different too. It's clearly taking inspiration from traditional super robot shows as well as tokusatsu like Super Sentai and Ultraman. MetalHawk and Shuta Go remind me a lot of older Ultraman shows where the Ultra of the series would often serve as a mentor to a local child. The kids before becoming Headmaster Jr's make me think of the team from Hard Gumi. The Pretenders go from standard human disguises to armored mode in battle. Then release their inner robot mode as things get complicated when fighting the monstrous Decepticon Pretenders and Seacons. Which follows the standard fighting sequence of a Super Sentai/Power Rangers series. Godmasters/Powermasters are handled similarly as well.

Aside from the stark differences, the show is just fun. From the all out brutality of the Decepticons to moments like Shuta playing soccer at school. The show is a roller coaster ride, and that's just the first few minutes! Clearly as someone who likes monsters, spooky stuff, Pretenders and loves Powermaster Optimus Prime like I do would favor this show. Not just that, but Transformers every once and awhile needs a refreshing and this was the first major one. Not just a change of scenery or new characters, they practically reinvented the wheel while still staying true to it's roots. It's a real treat to watch the first time and again for the millionth.