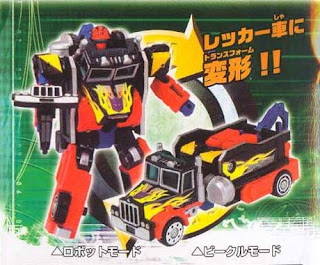 Robotmasters was a neat Transformers line from the mid-2000's that I have a lot of love for. A mixture of new and old toy molds in fantastic decos in a Transformers multiversal showdown in the Blastizone (a suburb here on Planet Zone). It was pure robot anarchy and I loved it. Wrecker-Hook was one of the early stand outs. Outside of Japan we know him as Tow-Line. He was a lovable character in Robots in Disguise that took his tow truck alt mode a little too seriously.

However by 2004 he had somehow lost his memory and became a Decepticon! During this time Wrecker-Hook became a capable mechanic who can fix almost anything. He got a visible upgrade as well. From the green and purple as an Autobot to black and red with gnarly flames as a Decepticon! Wrecker-Hook seemingly improved himself as a bad guy. Even made himself a new friend in Wingstun!