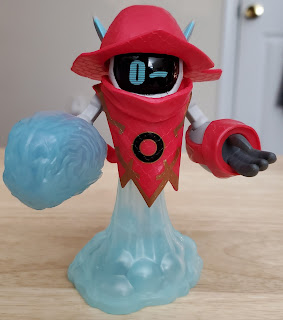 I've mentioned before how the merging of fantasy and sci fi makes Masters of the Universe so fun. The newest re-imagining, He-Man and the Masters of the Universe is a fun reboot that dives deeper into the sci fi side of things while still blending fantasy into the mix. It's in that environment that we get RK-o, a new version of Orko who isn't exactly what you'd expect. In this new version MOTU, Orko was a legendary magician that's long gone. Duncan (Man at Arms) finds himself in possession of a broken TO security robot.

While attempting to fix the robot, Duncan uses a magical core found in a chest in Castle Grayskull. Doing this downloads all of the former Orko's memories and knowledge into the little robot who now believes himself to be Orko. RK-o is a fun twist on an existing character that I have a hard time not loving. It's also pretty hard not to love his action figure.

The He-Man and the Masters of the Universe toy line is aimed at a younger group than Origins or Masterverse. Though RK-o is still a pretty neat toy. It is released as Orko and not RK-o, but I'm being specific to the fiction. I might talk about another Orko and it keeps things separate pretty simply. If you came looking for a lot of articulation, you've come to the wrong place. His arms move at the shoulders and the wrists swivel. I've heard some folks say the head turns, but mine didn't. Mine could be a stiff joint or somebody else broke theirs.

As well all know Orko floats, RK-o is floating on a translucent poof of air with a small ball bearing on the bottom. The ball bearing allows the figure to roll easily on most surfaces. Like Trap Jaw, you can twist RK-o and he swings forward. This is used to launch his magic attack which is that energy ball you see in the picture. It's a hollow little thing that easily sits on his fist. It's a simple little play gimmick on a simple figure that's full of character.