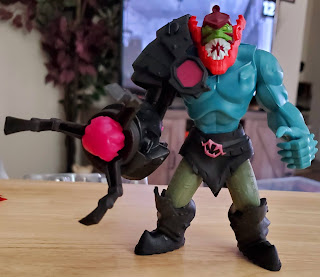 The new He-Man and the Masters of the Universe toys have finally started showing up at my local stores and I was happy to see them. I loved the show and couldn't wait to get a few of the figures. Honestly this new He-Man renaissance is pretty great. There's so much new stuff available that it's a MOTU fans dream come true. It's been super fun in the MOTU groups talking the various different toys. I grabbed Trap Jaw this past weekend happily. He's my first figure from this new line and what a cool toy he is. These new figures serve as a core class for MOTU at $10 each and more basic articulation. It's not much of a concession as they look great and even have gimmicks.

Trap Jaw is a departure from his classic look, while still looking familiar. He's a nice mix of cyberpunk and fantasy with that robot arm and goblin boots and stitched tights. The helmet is a play off the original design while being more scary. There's even a throw back to his classic zip line loop. Trap Jaws gimmick is that energy projectile can be shot. It's not on a spring, instead if you twist him at the arms and waist, he'll bend around as if putting some effort into the attract. Let go and the toy swings around flinging the blast out towards the Masters. Pretty neat.

Notice I said Masters? That's because in this new series there's no more Heroic and Evil Warriors. Instead we have the Masters fighting the Dark Masters. You can guess which side Trap Jaw is on. It's a reinvention of a classic story that still manages to homage the original. Obviously intended for smaller kids, but so far us adults seem to really like it. I've even been seeing adult fans praise it over Revelation. I'm sure that's pretty surprising to Mattel who you can bet are paying attention. I'm usually very G1 about MOTU, but am happily enjoying this new series a lot.