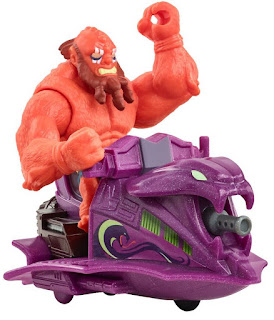 It's been far too long since I've talked about Eternia Minis. This set is Beastman with the War Sled, which is part of the Revelation series. Like Fisto, Beastman is available carded but has some deco differences here. It's small, but just enough to make it different. Also like his case mate, Beastman doesn't come with his whip weapon. It's too bad as he'll have both hands on the handlebars. Let's get down to the star of the show here.

THE WAR SLED IS AWESOME. Normally the War Sled is a slight variation of the Sky Sled used by the Evil Warriors. A little different looking but really it's the same thing. Not anymore! Now a cobra headed, bat winged air scooter of doom! Cast in a glittery purple with awesome green highlight and look at the decals! Holy shit this is a damn fine vehicle for villainy. It's just so freaking cool looking! I'd be super happy with multiple releases of this thing in different colors. Just look at that thing!