The Scrabble People was a "fun" way to help children learn to read by pairing the alphabet with people by ways of a letter on their shirt. That kid with an 'A' shirt? Well, he's an asshole! What better way to combine a classic board game with something...  In this 'delightful' Halloween special, Mr. Scrabble and some kids are picking out a pumpkin when they fall inside a giant one. Inside this giant pumpkin is Nonsense, a land where nothing makes sense. Why doesn't it make sense? Well, they're not aloud to spell words or read them! Why would they not be allowed to do such a basic thing? Because the ruler of this land doesn't want the people to learn more than him and call him stupid. No really! Don't you worry, Mr. Scrabble and the kids save the day by fat shaming the bad guys daughter.

How many point's do I get for saying this movie is a piece of shit? 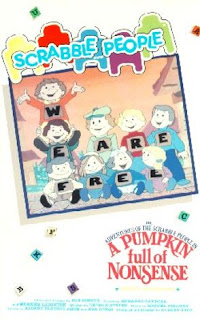