When it stinks in Whoville so bad that the wildlife starts howling that means one thing, it's Halloween! That's right, our favorite holiday here on Planet Zone! When it starts to stink that bad, they residents lock themselves away in their houses, because The Grinch is about to raise all sorts of hell! Fortunately Euchariah has to take a dump and on his way to the euphemism get blown away by the stinky wind... I'm pretty sure the Grinch is just holding his ass open in front of a fan... and ends up face to face with the Grinch! The showdown ends in a nightmarish fever dream that probably causes some pants shitting. I wish I was joking, this cartoon is one long fart joke and the adventures of a boy who really has to poop. It used to come on the Disney Channel. 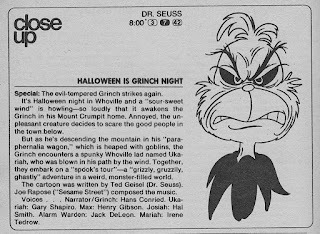