Trick Or Treat In A Decomposing Costume

I've never been to Sempliner's Black Tie Tuxedo Shop also Costume Rental. I can appreciate that they didn't hold back when naming their store. More business names should read like a rough draft of a shitty novel. The real star of this commercial though is the wall of masks shown. According to the channel I found this on, the commercial aired in 1993. Often with the independently run stores, you'll find items sitting on the shelves way after their prime. Like that Wicket the Ewok mask that's probably been on that shelf since 1983. Or maybe 1984 after they bought it from Walmart on clearance the day after Halloween. Is that a California Raisin? 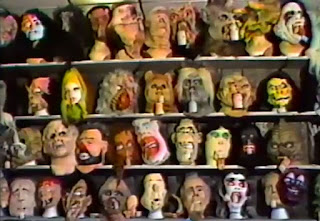