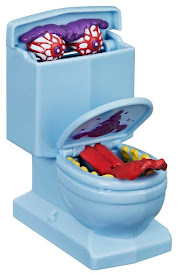 When The Real Ghostbusters get scared, they flip the crap out. That's fair enough. Think about it, if you or I saw a ghost, we'd probably run away screaming. These dudes, they literally deal with ghosts all the time. So when they get scared, it's pretty serious business. That leads us to this commercial.

Happening upon a werewolf in a junkyard scares Ray so much that he has to take a shit then and there. Right in front of Winston. Fortunately there's a random toilet just laying there. It's probably not connected, but at least it's better than making a Fright Feature in his pants. Unfortunately, the toilet is FEARSOME FLUSH! The demonically possessed toilet!

I'm not sure if a sudden mouthful of poop is what pisses him off so much or that he's just being a scary ghost. Who's a toilet. Either way it sends Winston and Ray packing as other ghosts kiss their back causing them to display new Fright Features gimmicks. I'll be honest, this is a pretty weird commercial. Also, what happened to the Werewolf Monster? Was the plan all along to send them to Fearsome Flush? Or did he just leave?

Fearsome Flush will be re-released at Walmart this summer. I'm pretty happy more Real Ghostbusters toys are on the way. It's a nice way to lead into the all new Fright Features figures coming soon. Not to mention, who wouldn't want a ghost toilet? Just think if it was a Conjuring movie. Ed and Lorraine Warren have this old toilet in their basement museum... it's evil is truly unknown until Judy make a terrible mistake on Taco Tuesday...