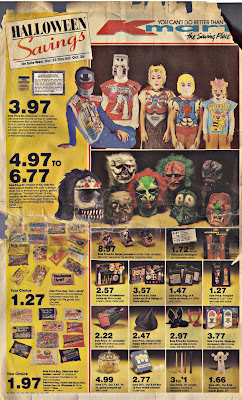 Halfway to Halloween, Walpurgisnacht, or just another day here at Zone Base. However you word it, Halloween is on folks minds even in the spring. We love it spooky and today seemed like a good day for it. Kmart used to be a pretty great place to shop before whatever the hell happened. That place went downhill and died messily in front of us all. During it's glory days people often got their Halloween costumes at Kmart. Now they often get them at Spirit, which may be located in your towns old Kmart.

You may have noticed the sweet collection of Ben Cooper/Collegeville style costumes up top. There's Heat Seeker, Megatron, She-Ra, He-Man, and Bumblelion. I just noticed She-Ra is wearing Catra's costume. The rubber mask selection is great too. Fantastic Faces brand with real hair and some with blinking lights. Just right to earn some of that candy being sold for some amazingly low prices.

Adding to the great selection, check out the 'boxed play sets'. The picture shows Voltron, Hordak, and the Autobot Dress Up Set. It may seem like a cheap trick by putting role play toys with the costumes. It also was one of the best ways to get an accessory to your costume that wasn't available. Next to the play sets is probably the most important thing you'll need when trick or treating. Flashlights.

We've all learned that wearing a costume and walking on the streets on the one night a year when people are expected to be out at night makes you completely invisible to cars. There will be broken Michelob bottles everywhere that you won't see without the aid of the flashlight. It's always Michelob. After Halloween, your Mom will keep the flashlight by her bed. It's just in time too, the one from last year's batteries were starting to die.

Next is something very special to me. Make-up kits. I freaking love them. There's also additional costume accessories like a witch hat, and generic costumes. But most importantly is that 41" reversible cape. It has a collar, the Dracula cardboard head hanger, and it's a piece of crap. A pretty cheap plastic cape with a badly sewn on collar that will probably fall off before November 1st. Despite how crappy it is, I love it and will fucking kill over it. Admittedly it's mostly due to the cardboard Dracula hanger.

There's also the obligatory candles for your jack o' lanterns or to make the living room table look spooky. It really makes the Tombstone pizza while trick or treating the neighborhood kids that you normally hate special. You're probably also going to catch that paper ghost on fire with them. Speaking of the living room table, that's where that glass pumpkin will go. You'll realize in February that it's still there.