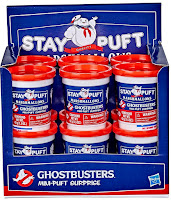 Because Ghostbusters: Afterlife dropped an awesome bomb on the world, it was revealed that Hasbro would be selling new blind packed mini figures of the new Mini-Pufts this fall! They'll be blind packed in containers of Stay Puft marshmallow cream (trying making a fluffernutter with this goo). The little guys will be hidden inside the 'goopy marshmallow-like compound'.

Hopefully the 'compound' won't be as sticky as the ectoplasm in the slime tubes from 2019. Combining these with the new Ecto-Plasm and Ecto-Plasm Ghost Gushers and I've got a lot of slime to dig through soon. I'm not complaining though, it's gonna be great! Hope I don't get any on the carpet. 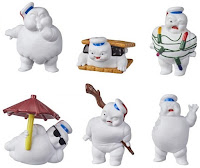