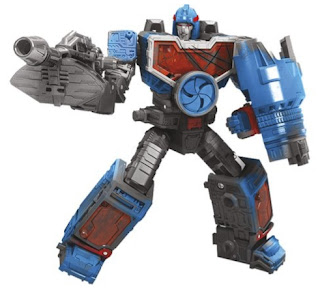 Another Toy Fair has come and gone, and with it, a lot of retweeted tweets of the same tweet. As I've admitted prior, I usualy get lost in the flury of news mid-Saturday. Which wasn't as bad this year as most of the news I saw was more info into the info put out earlier in the week. There's a lot I missed, but I saw enough to form some opinions. Actually, I spent all of Satuday stuck in a shut down innerstate on the way to visit my Mom. That was the first time I've even been diverted onto the opposite side of a highway after a bullzoer created a path. We got close enough to the wreck to witness something out of a disater movie. Yikes.

The Transformers talk I did last week got more insight at the show. I was already sold on new Earthrise and Cyberverse offerings, but the new Netflix series looks great and the Walmart exclusive toy tie ins look pretty great too. I'm reminded of when Hasbro released repaints of Beast Wars toys when the show got reran on Fox Kids. While these are repaints of Siege toys, they do have some new characters and show specific repaints. So, that's pretty dang neat. The picture I'm using at the top of the post is from this, and while the toy is a repaint of Refracktor, the character is a new guy named Scrapface. Who's seemingly a homage to the GIJOE character Scrap Iron. Neat!


Speaking of GIJOE, while a few more news bits about the new Classified line was spoken. Most interestingly to me was the news of Jada Toys releasing die cast toy of the various GIJOE vehicles in multiple scales. GIJOE has always had really cool vehicles and little die cast versions would be much more managable to keep up with as an adult. Not to mention, litle diecast toys are always awesome. I'm pretty excited for this new GIJOE relaunch and look forward to getting the figures. There's plenty of folks out there making flipant comments about it and I'm not one. Even if it fails, I'll be happy to see it back while it's here. 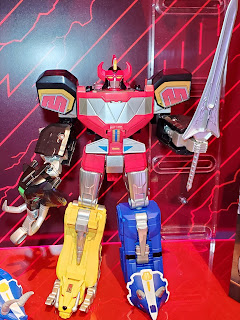 Jada's set of Nano Metal Power Rangers are showing at stores recently as I've been told. There was a bit of Power Rangers news at the show as well. Most exciting to me is a new version of the classic Megazord by Hasbro. Releasing in three different retail packs at $14.99 each, it's a fully transforming and combinable Megazord. Really happy for that and hope I don't have too much of an issue buying the entire thing. Hoping the Dragonzord follows as well as more Megazords. Ironically the second season of Beast Morphers premired Saturday as they announced it's succesor was announced to be based of the Ryusoulger Super Sentai series. I haven't watched much of it, but I have liked what I've seen of the designs. Hoping it's a good follow up.

Mattel showed upcoming Masters of The Universe product with looks at upcoming Orgins and MegaConstrux figures. The toys look really great and while I'm more looking forward to the Megaconstrux figures, I'm definitely buying my share of Origins toys. It's a little hard to beleive so much cool He-Man stuff will be at my local Walmart soon. 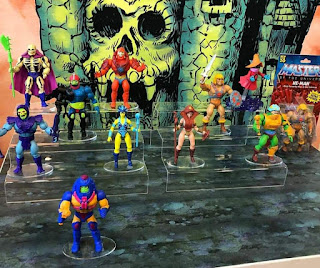 There was more talk of the upcoming Ghostbusters toys from Hasbro which includes reissues of The Real Ghostbusters toys. If I'm understanding right, the first wave will be exclusive to Walmart. Honestly I wouldn't mind if the entire line is Walmart exclusive. While others may not like such a thing, I have two really good Walmart stores within 20 minutes of each other. Not to mention I like the limitation of only one store carrying something, so I don't have to look everywhere. Really looking forward to the Ghost Gushers and Fright Features figures still as well. This looks like a lot of fun that's right up my alley.

There's still a ton of news I haven't sorted through yet. Like I've said, it's literally a ton of news that's hard to keep up with. Here's a good catch all for most of the information though. I'll definitely be sorting though it over the next few days as I play catch up. I somehow missed news of a cool Godzilla board game from Funo that will definitely be bought on sight. Due to my situation of being stuck in a one hell of a car wreck most of the day Saturday, the news was read mostly after getting back to my town and eating a western burger at Ihop. I did pre-oreder the Hasbro Selects cassette pack. How could I not? I'm still heartbroken from not finding the last wave of Siege Micromasters including those tape molds. That was a really good burger too.
2020 cool funko ghostbusters GIJOE Godzilla Hasbro Jada Masters of The Universe mattel Power Rangers Toyfair toys Transformers Zone Base