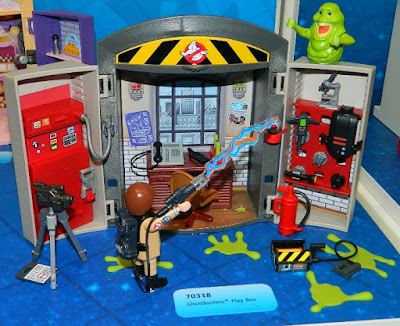 I've been singing the song of Playmobil Ghostbusters for so long... I was going somewhere with that, uh... like a long time. Anyway, I'm a fan of Playmobil Ghostbusters. I had assumed that the line was getting phased out as Hasbro has the license now, they're seemingly replacing it with Scooby Doo (swapping out spooky lines), and most of the stuff has been on clearance (got the Ecto-1 for 22$).

However buried under all those click bait tweets you're probably still reading again for the millionth time was a little nugget. A morsel. A... *ahem* another Playmobil Ghostbusters item. Under a new play set pattern Playmobil is seemingly producing of small unfold-able locations is the Ghostbusters Play Box. A smaller, more compact version of the firehouse that looks pretty neat.

Judging by the camera, I'm assuming the Playbox's is intended to be a filming set. Which works as you've got some pretty choice locals. The containment unit, Janine's desk, and the put all your shit here wall. Peter Venkman and Slimer figures are pictured, so I assume they're included. It looks like you get a fair bit of accessories too. I could see this coming in handy as a backdrop for Instagram pictures. I wonder how it would scale with other figures? A Real Ghostbuster/Fright Features figure is just  little bigger than a Playmobil. I could see it working. 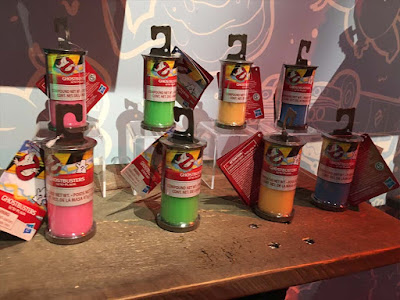 Another bit that escaped my attention was these cool new slime tubes with mystery figure. Similar to the ectoplasm tubes I was buying late last year (I've literally got a case still), you get a tube of slime with a randomly assorted mini figure hidden within. There's four different ghost figures assorted in four different colors. I don't know what the ghosts are yet, and I'm hoping they're randoms ghouls.

Not that I'd have a problem with a little Slimer, but I'd like some extra variety if I had a a choice. With the Real Ghostbusters figures coming I have high hopes for more of the random mini ghosts they'd come with. Something to pair with your new toys would be the perfect thing to go in these tubes. But if it's another Slimer, I'm not going to complain. If that last sentence were a text message, I'd type LOL and put an emoticon with it. The laughing one, maybe with tears coming out of it's eyes.