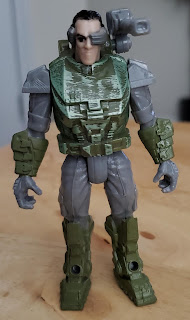 Ruck is the ground artillery guy in Alpha Team 1. Like Steadfast, he's also a cyborg . Ruck has robotic legs and his covered in cool sci fi armor that you can plug various guns into for more firepower. He's pretty much a walking tank in these regards. Ruck comes with a backpack mounted gun that can fold over his shoulder. It matches up with the sculpted on headset that likely gives him a heads up display for use with his various attached weapons.

I see that armor and think Alien Syndrome. A major part of why these Final Faction toys are so cool is that old school flavor in the designs. Ruck is a great example of that. Like I said above, you can attach various attachments to him via accessory sets. The gun pods from the Air Assault set would be a natural fit though I think he's general enough for most things from the sets to match up pretty well. This figure with a helmeted head would make for a good army builder figure. He's a solid action figure from a line with a lot going on for it. I just can't say enough good things about these toys. It's a amazing they're exclusive to the Dollar Tree. There's more heart in these than much more expensive figures.