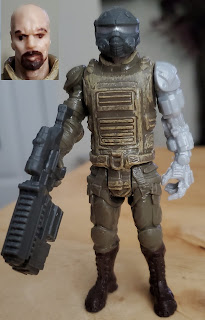 I've talked about Final Faction here before, but not enough. This wonderful little line has become quite popular since launching around Christmas. It's a nice throwback to action figures of old and extremely inexpensive. Being exclusive to the Dollar Tree, each figure/accessory set is only $1 each. That's super hard to beat. The figures are 1:18 scale and have five points of articulation.

This is MSGT. Steadfast, the leader of Alpha Team.1 (the good guys). Steadfast has seen some action as his cybernetic arm would imply. He's decked out out in olive green riot gear and a removable helmet. The helmet offers a full face shield with goggles and respirator so he doesn't catch covid-19.

Also included with Steadfast is a big gun. You can't deal with an alien invasion by talking. With a gun like that, Steadfast isn't mincing words. I'd recommend the Heavy Arms accessory set to fully outfit this soldier with a ton of firepower. He's the kind of toy you want to just pile a million guns on. Just a kick ass type of guy. Steadfast is the perfect figure to start with in Final Faction. Not only is he the leader of the good guys, but an awesome action figure.