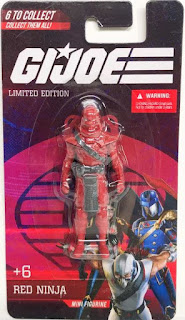 Reports of new dollar store GIJOE mini figures have been floating around recently. I've been hot on the trail, but so far they've only been popping up at 99 Cent Store locations. I don't have any of those in Georgia. I do have plenty other discount chains though, and many closer by since moving this past summer. Realistically I could just make a day out of hitting them all up looking for these guys.

The toys are small, under two inches (I've seen them next to a M.A.S.K figure in comparison pictures) with no articulation. The figures look pretty great. There's also a Power Ranger series I'd love to find. Not sure if they're new though. I've just seen then on the pegs in pictures. At a dollar each (maybe more at some places) I'd scoop up one of each on sight.

By the end of summer when these stores start ramping up their Christmas stock I should be able to find them. If not sooner. I could see a fun morning spent hitting up each discount store on the hunt. It's been awhile since I've been on one of those drawstring backpack adventures. Just fill the thing up with dollar toys. Good times.