Not all of Kingdom is updates to classic characters, fortunately there's some new bots in the mix as well. Not just new bots, but a  new kind of bot even! Paleotrex is a Fossilizer. A Fossilizer is similar to a Weaponizer, but made of bones. That's right, Paleotrex here can be taken apart and fashioned into armor and weapons for other Transformers. However those weapons and that armor is made of dinosaur bones. After the initial confusion of what I just said, the inherit awesomeness of it just rushed through your mind. I know. It's metal as fuck.

Paleotrex is a skeleton robot Predacon that turns into a Tyrannosaurus Rex skeleton. It's just as awesome to say that as the fact of it is. His robot mode head has a flip down mask that's really similar to the old mutant heads that Beast Wars toys originally had. Speaking of original Beast War toys, with his mask flipped down, his head becomes Optimus Primal's missing skull mace.

Let's put that into perspective, Optimus ripped this guy's head off and is using it to beat other Predacons. Kingdom is metal as fuck. 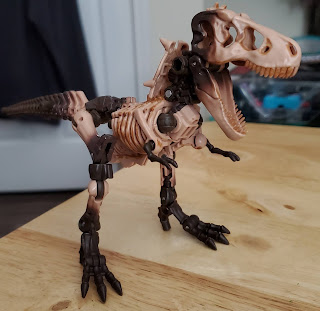 Paleotrex turns into a T-Rex skeleton, like I said above. Because of the gimmick of turning his body into other things, he's a partsformer. You take him apart and rearrange him. That kind of thing bothers some folks, but is unavoidable here.

In both modes Paleotrex looks great. While I vastly prefer the mask down, keeping it up is a good way to remember this is supposed to be a robot. I say that, because his robot mode isn't very robotic. Paleotrex is a an alien robot dinosaur skeleton. With that many descriptive words something's got to give. In a line full of robots that turn into things, the skeletons that turn into skeletons get a pass. Not to mention, it's rad as fuck. I mean, just look at it.

I can make jokes about how metal Paleotrex is (as fuck), but there's more than meets the eye (*cries*) here. This is a new character, which is rare these days in Transformers. Part of Beast Wars magic was that it was a mix of new and old. Even now that Beast Wars is being revisited, there's something new with the old. Transformers is a giant iceberg that keeps getting bigger every time you look.

Hasbro bought Kenner in the 90's and later had Kenner run Beast Wars. After all these years Beast Wars is back in the forefront with these new skeleton dinosaur robots included. Dinosaur skeleton robots that you take apart and use their bones to make other things. Hey, didn't Kenner...

I talk about Microman a lot here. Microman is part of that iceberg. In formation and ongoing growth. There was a bootleg Microman line called Dokuroman. The toys were casts of Microman toys (with less joints) and given skull heads. Here's a skeleton robot. I'm sure that's an accidental homage in this case, but it's still there. Oh hey, what was a feature of Microman again? The Transformers iceberg is neat, huh?